A young woman from Kyiv, who has protected her one-month-old daughter with her body, got 25 injuries 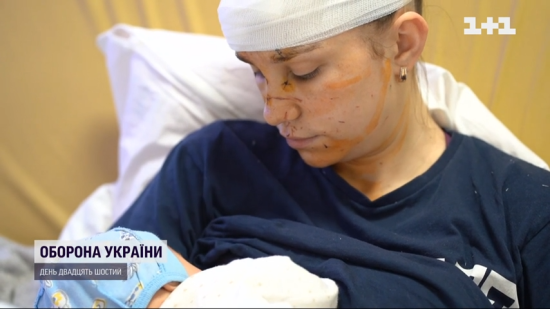 She hasn’t realized that the blood was hers, but not her baby’s. A young woman from Kyiv, who has protected her one-month-old daughter with her body, got 25 injuries.

The family managed to get out from the high-rise building, where a wall had been pulled out by the explosion.
The woman covered several weeks old baby with her own body during the explosion in Vynohradar district. 27-years old mother got 25 injuries from glass debris all over her body, but managed to save her daughter. Olha has got surgery in “Okhmatdyt” hospital and feels normally now. Her daughter Victoria stayed unhurt.

Olha is hugging her Victoria tightly. When the full-scale war has started, the girl was only 2 weeks old. The family was afraid to start long and unknown trip from Kyiv to West, so they decided to stay in the capital. «That is impossible to get used to the war sounds» — Olha says. On March 18th, explosions were getting closer and closer to their home. At 8 o'clock in the morning Olga took Vika in her arms to feed her, and at that moment an explosion erupted.

“I cover her with a blanket to keep her warm and thanks to that, the baby stayed alive. I managed to protect her and Dima jumped up and covered us both as well. Thanks God, she was in my arms. She has only one tiny scratch on her cheek and a bruise on her leg”, — the woman said.

The girl’s father Dmytro has injured his legs. Doctors have bandaged his wounds. But it was Olha, who suffered the most. All her body was full of shrapnel. The doctors counted at least 25 wounds. “It took us approximately 2,5-3 hours to remove glass from her wounds”, — said the surgeon of national hospital “Okhmatdyt”  Anatoliy Tymoshenko says.

Olha said that she didn’t feel the pain after the explosion. She was worried only about her daughter. “My head was injured, it started bleeding. I thought, that it was my baby’s blood. I started screaming and Dima said, that is was mine, not hers”, — Olha recalls.

Doctors have examined one-month-old Vika in “Okhmatdyt”. Luckily, she had no injuries, which was a real miracle, because the family’s apartment is totally destroyed.

The explosion took place in the capital in Vynohradar on March 18th. A kindergarten has become the epicenter of the explosion. However,  six nearby houses were also severely damaged. One person died, 19 were wounded – including 4 kids. The side wall was pulled out from Olha and Dmytro’s house.
The family has nowhere to return from the hospital. When all Olha’s wounds are cured, they will go to some place without active fighting. Dmytro claims that they do not feel desperate. They miraculously survived and that’s what really matters.

Occupants Illegally took More Than 2 Thousand Children from Ukraine to Russia in one day
Multiple Villages are still under Occupation: the Most Dangerous Areas in Kyiv Region on March 21st
Russian Troops Highjacked Operational Vehicles from Forestry in Kyiv Region and Burned Administrative Building
Дополнительно: