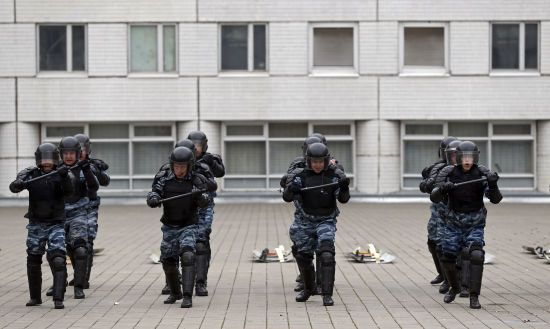 According to Energoatom National Nuclear Energy Generating Company of Ukraine, around 600 Russian riot policemen arrived at Enerhodar in Zaporizhzhia Region to suppress civilian protests against occupation.

The repression squad troops armed with nightsticks, shields and firearms are deployed all over city. Their task is to suppress any resistance protests and brutally break up even the smallest civilian demonstrations and gatherings.

“The occupants acts the same way as the used to act in Moscow and other ‘Raschist’ cities, but Enerhodar is Ukraine! And we definitely will win!”, Energoatom’s representative emphasized.

«What I Saw, I Hope No One Will Ever See» – Greek Diplomat Compared Mariupol to Aleppo
Russian rockets killed at least 8 people and destroyed shopping mall in Podil district in Kyiv on Sunday evening
Occupants Shelled Chemical Plant in Sumy Resulting in Release of Ammonia
11-12 millions of Ukrainians have left their homes because of Russian aggression. 3 millions went abroad
Дополнительно: